From 17 March to 06 May, 2006 Galerie Wilma Tolksdorf Frankfurt is presenting works by Ann-Kristin Hamm.

Being a student of professor Dieter Krieg and professor Albert Oehlen, Ann-Kristin Hamm graduated from the Kunstakademie Düsseldorf in 2004. Her strong and unique imagery soon drew attention. Works were to be seen as early as 2001 in group shows in Frankfurt am Main, Karlsruhe, and Vienna. Solo shows followed soon beginning in 2004 in Düsseldorf.

With her large-scale paintings, Ann-Kristin Hamm is taking an artistic position, which can be defined neither as strictly abstract nor as figurative. She does make use of patterns and ornamental structures such as abstract signs. At the same time, she breaks the surface by spacial structures, thereby creating a figurative field of associations. It is less the geometric conception of the image that drives the idea than a conscious aim for associative observation. In this frame, Ann-Kristin Hamm draws from an image repertoire containing familiar floral elements and decorative patterns as well as self-developed imagery. The latter is the true life-giving constant of her work. Because of this, her works attain a strong multi-layered complexity that can be tapped by extended contemplation only. 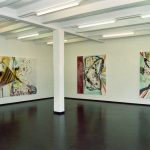 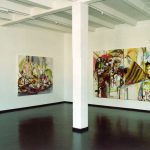