Galerie Wilma Tolksdorf is presenting new works by Rosa Loy by the title of TRANSFORMATION from September 2nd until October 31st.

Rosa Loy fosters a kind of figurative painting featuring largely female imagery, partly harking back to artistic traditions such as Symbolism, Surrealism or Pittura Metafisica, casting a spell over us and yet is at the same time strangely distant. The iconography of this style of painting, subtle and ostentatious in equal measures, both in terms of composition and of color, appears curiously personal; yet the artist works with complex issues such as proximity, identity and difference, every one of which affects us in some form or another.

The striking characteristic of Rosa Loy's art is not least the allegorical discourse, which affords every muse and every painted figure - often mid-action and extraordinarily attired - a deeper meaning, conveying a basic awareness of the uncanny.

Rosa Loy studied from 1985-1990 at the Hochschule für Grafik und Buchkunst Leipzig and was a master student of Rolf Muenzner. The internationally exhibiting artist (museum exhibitions took place in Gera and Zwickau, solo shows and group shows took place in Germany, England, USA, Finland, and Korea) is connected closely to the city of Leipzig and its art scene, while creating an entirely individual and complex work. 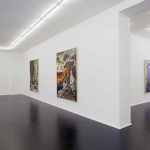 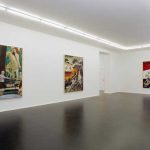 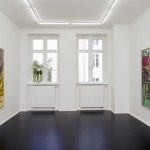