Galerie Wilma Tolksdorf Berlin presents new works by Sebastian Gerstengarbe which he made during an extended stay in New York.

Sebastian Gerstengarbe's first solo exhibition at Galerie Wilma Tolksdorf in spring 2007 attracted a great deal of attention. Frankfurter Allgemeine Zeitung called the works "rich in Detail" and noted a "concentration of motifs", while the Frankfurter Rundschau was impressed by the "finely wrought and delicate Pictures".

Sebastian Gerstengarbe's works are characterised by a reduction to the essentials. In his pencil drawings, the things he draws, such as telephones, chairs, trees, houses, achieve a enigmatic equivalence.

Sebastian Gerstengarbe's method of working typically consists of two phases. In a first step, he draws sections of everyday rooms and spaces around him - a kind of documentation, like field recordings. Subsequently he manipulates and extends these motifs. Everyday situations and objects suddenly develop their own specific dynamics: sometimes Gerstengarbe condenses his drawings in a surreal way by changing proportions or emphasising certain details, thus giving the places he shows a new charge. In this way, Gerstengarbe directs the beholder's gaze to inconspicuous details of the everyday and creates an aesthetic counterweight to the heedless way with which we usually treat such everyday scenarios.

Even though there are no people in the drawings, the works nonetheless create a strong sense of intimacy. The places drawn by Sebastian Gerstengarbe are clearly inhabited. Above all, in the new works we can find many traces of he artist himself: sometimes with subtle humour, sometimes exaggeratedly, the classic theme of the self-portrait is taken up in numerous variants. We discover it in reflections in windows and tea sets, in hands that draw, or in the drawing of his own view of his lower jaw. In contrast to their predecessors, the new works by Sebastian Gerstengarbe seem lighter and "tidier" (as the artist would call it). And while previously the titles of individual works usually described the motif, now the artist uses the titles to add another layer of interpretation to the works, either laconically (Schwung, Fleischbeschau, Wetterfühlig wegen Splitterbruch) or ironically (Krawallmacher, Unterkiefer, Hero of the Week).

Sebastian Gerstengarbe was born in 1973. He lives and works in Halle/Saale. 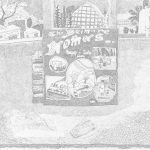 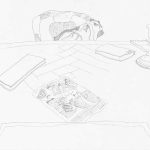 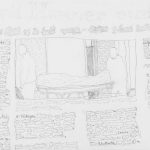 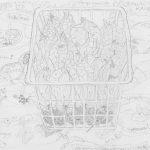 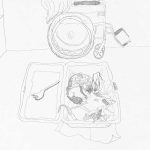 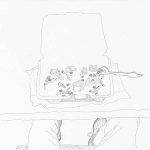