Galerie Wilma Tolksdorf is delighted to present Timo Kube?s first solo exhibition to the gallery. Entitled "THIS", Kube presents a deeply introspective focus upon painting and its ability to collapse the illusion of the image into an uncanny form. ?This? is then an expression and experience of the object; an exhibition that follows with a range of forms from wall-based pieces to sculpture.
"THIS" stands as a conundrum: how is the image indexical, able to point at something, and offer that in an appearance? But what occurs when the appearance of the thing, the pictured subject, is obscured to the point of its denial for presentation? Does the indexical act of pointing out become focused upon itself, and in turn make the act an object in itself, an arrested-perception? These are some key questions that echo throughout Kube?s conceptual inspiration drawn from philosophical studies in perception, namely from phenomenology. Theoretically influencing his careful approach to painting, he elaborates upon painting?s various properties to the degree that even its definition and arena no longer seem to allow for a comfortable distance involved in viewer-ship, that apparatus that distinguishes viewer from the implied object.
How does the subject offered by the image correspond to its communication? The answer to such a question is quickly reverted to "Where is this?"; for what we find, or see is hardly any subject at all, just vacuous pictorials of dimly lit corridors and empty rooms. Most poignantly however, it is when Kube depicts covers, the curtain paintings for instance, or simply bathes the surface of the canvas with a dense layer of copper, or silver that the work then imposes a sense of emptiness all the more; one could even sense that the vacuous is drawn throughout the space from which we are viewing in. Either through this depiction of void, or the opacity of material, we are in a sense placed throughout that nonrepresentational recess, the index itself; so to speak, we are in This. And so, when we are more aware of such non-location, stationed in-between there is the possibility of intertwining the physical and psychological categories, along with the parameters that come into play in processing judgement, i.e. the act of seeing, the object referred to, and the action of determination, or positing a meaning. All these ciphers are poised in a novel form of screen. Tension and attention, the tension in attention; in-this Kube manages to hold us at-a-tension.
If we take Rosalind Krauss? notion of modernity and its preoccupation with the index, Kube?s objects and paintings take the function of mediation further, towards a point where the surface points dynamically inward, outward, and within ? the focus being the surface layer, or what could be called "the seduction of a veneer". Metallic, reflective materials, copper, or mirrors ? in some instances almost entirely scuffed, with the exception of a profound figure - repeatedly arise in each work. Could this be a play on division, its use of reflection, and how we reflect upon this (thing)? Is the delay of a revelation, i.e. of the pictorial object, an echo of a failure to open a view to the thing? In other words, is there an architectural fractal of infinite space(s) revealed? Monolith, a large painting showing a monumental building, peaking from a cloak of darkness, attests to what is an icon of such an instantaneous loss and opening.
Within the minimal devices, the strong economic language with which Kube uses, "THIS" presents an exhibition that offers a subtle experience of matter, and how it ever so slightly moves from the wall and consumes the viewing environment into a seductive and uncanny concrete-fiction.
Timo Kube, born 1977, lives and works in London, UK. 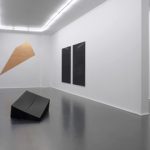 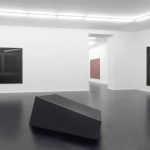 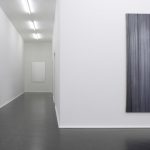 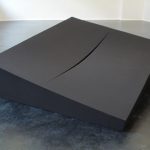 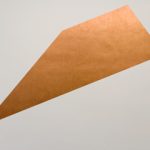 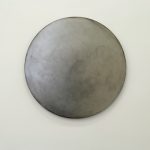