Yvonne Roeb works in different media, above all producing sculptures, as well as film and video installations. She is primarily interested in the space of collective images from everyday life, cultural history, mysticism, religion and dream. Her oeuvre sees her surreally approaching symptomatic phenomena related to superstition, old myths and proverbs. The precision of the forms she chooses is always of special significance.

She always makes use of symbols that are clearly and deliberately discernible as dummies. Like the ravens in the candelabra in the piece "One for sorrow", which takes its title from the nursery rhyme. Other works, such as "Voyager", seem to be props from sci-fi movies or films of the future. The objects' definitive function cannot be pinpointed exactly. This is also true of "Booty Cabinet", which constitutes a carefully constructed little cupboard for reliquaries, sub-divided into three segments. It could be construed as furniture, a secret hiding hole, or the ballot box of some secret society. Ipso facto they are bee hives. Another piece seems quite incidentally to consist of an old wooden table, slightly dusty, and scribbled on, with simple clay pots as can be bought in any store. The "Carnivores" in its are delicate pink flesh-eating plants modeled from fine clay. Her "Python" installation entails a snake winding both sweetly and yet in poisonous apple-green round a heating pipe. The "Honey Thief" piece presents a strictly mathematical structure and the possible dissolution of structure. Individual hexagons are configured to form a circle and the rings linked to one another. The symbolic circle remains open at one end, as the decisive keystone is missing. Instead a fishing line leads to a reel on the wall that keeps the line taut - such that it might snap and be broken the very next moment we think.
Yvonne Roeb is a member of Katharina Fritsch's Master Class and lives in Münster and Berlin. 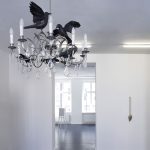 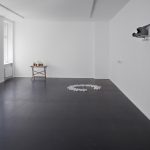 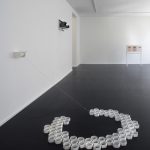