Alle Zeit wach is the title of Yvonne Roeb's third solo show at Galerie Wilma Tolksdorf, shown in the gallery's Berlin space.
The phrase '(be) always on the watch' can be found in the Bible, calling upon us to be ready for what may come and - to put in a modern way - to go through the world with a watchful, open eye.
The artist uses this phrase as an ironic reference - the impossibility of actually realising this command is obvious, and in a larger context can be transferred to our inadequacy, which is immanent to humans, our repeated attempts and failures which culminate in our own transience.
In the latest cycle of sculptures, we once again see something that is typical for Yvonne Roeb's work as a sculptor and drawing artist: motifs that seem familiar at first, but on closer examination oscillate between reality and surreality, and can never be fully grasped through pure observation:
'A lot of space for reflection remains between the sculptures and between the lines. The subsequent images in the beholder's head, spinning on the narrative thread - that is Yvonne Roeb's intention' (Jens Hinrichsen, Tagesspiegel, 26 May 2007). Sliding from the all-too-familiar to the 'uncanny' (in the Freudian sense), that which cannot be grasped, is an important aspect of the works' effect: faced with the double-tailed, skeletonized horse bones, grown together in the manner of Siamese twins, of 'Midnight Rider', the beholder feels a 'slight shudder' (Hinrichsen), just as in front of 'Conjunction', which plays with the motif of a heart (with all its romantic connotations) which the artist however represents in an anatomical-organic way, and which, in the spirit of the ambiguity of her works, is doubled in a dark mirror. 'Bock', a black he-goat raised in an aggressive posture towards the wall, with its dangerously pointed horns and its black hue transports a sense of virile archaism. The pure white of the hand protruding from the wall - 'Maybe forever' - is only at first sight a symbol of innocence: very delicately and yet without mercy, two fingers hold an insect by its wings and prevent it from getting away. The bird carelessly entering the 'Birdcage' would be similarly caught, because this work consists of two cages melted together, which in spite of their visual unity represent an imbalance.
The organic motifs, often from flora and fauna, serve Yvonne Roeb as a basis for the creation of a world of her own.
Yvonne Roeb, born in 1976 in Frankfurt, am Main, lives and works in Berlin. She graduated from Kunstakademie Münster, and she is currently Katharina Fritsch's Meisterschülerin. 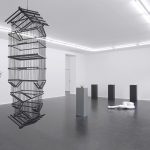 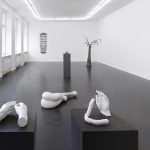 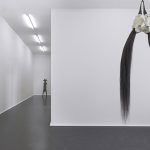